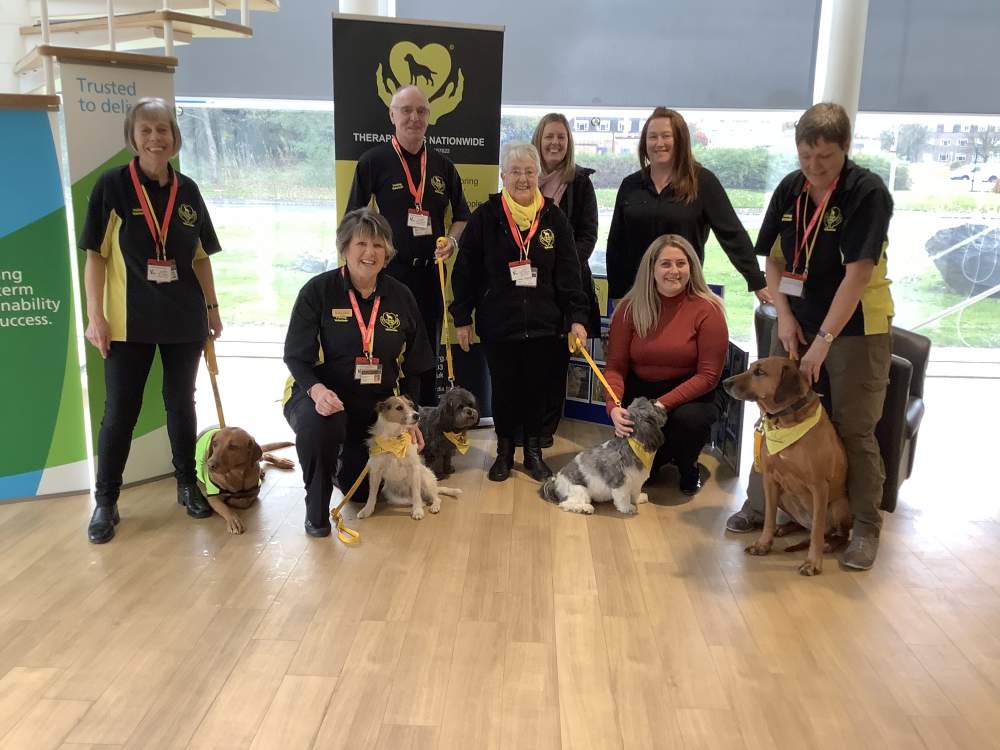 Wirral-based Therapy Dogs Nationwide made a stress-busting guest appearance at Urenco Capenhust this week when the dogs and their owners were invited in to take part in a Health and Wellbeing month-long initiative.

Therapy Dogs Nationwide is a national charity where volunteers take their own dogs into the community to visit hospitals, care homes, hospices, schools and prisons.  They also pay short visits to universities, police stations, ambulance stations as well as staff working in organisations such as Urenco.

Urenco Capenhurst staff met the dogs and their handlers over a two hour period and were able to stroke and pet the dogs and learn more about their role as stress busters in the wider community.

“This is the first time we have run this type of programme for staff.  The Therapy Dogs have been a huge hit.   The Health and Wellbeing Programme is in recognition of the fact that stress, depression and anxiety are on the rise nationwide, both in workplaces and homes, and the health and wellbeing of our staff is extremely important,” said Lynton Simmonds, Managing Director, Urenco UK.

“The month long event has been well received by all who have participated in the many events and activities on offer and we are currently exploring ways to introduce a sustainable health and wellbeing approach to benefit everyone working at Capenhurst longer term.”

Janet Rimmer, Therapy Dogs Nationwide said: “We were delighted to be able to come along with five of our wonderful dogs and it was a pleasure to meet so many members of staff from Urenco.  We really appreciate the opportunity to talk about what the charity does whilst giving people an opportunity to meet our dogs.

The use of animals especially of dogs as therapy is not a new idea. The benefits of Animal Assisted Therapies (AAT) have been extensively studied and the results range from improvement in general health and wellbeing to increased confidence levels, improved and controlled movement to improved communication skills.”

Urenco Capenhurst’s Health and Wellbeing Month centred on the themes of fitness, mindfulness and healthy living, which are all linked to our mental health and general wellbeing and fitness both at home and at work.

Staff participated in a wide range of wellbeing and fitness activities including a pop-up gym on the site and talks and workshops about wellness, mindfulness and life coaching.  They have signed-up for activities such as CrossFit, Wing Chin Kung Fu, Yoga, meditation, acupressure massage and sports biomechanics.  In addition, the company has served-up free fresh fruit and an increased number of healthy eating options were on the menu in its two on-site cafes.  The Veg Box Charity and social enterprise was also well received with many taking up the option of receiving organic fresh vegetables from the local organisation.